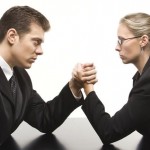 “Mommy, you work so hard with your computer. Mommy, can I say hi on your conference call? Mommy, I am going to go to work and help the people,” all said by my four year old daughter Opal. Opal is named after my female idol and her great grandmother, Opal. She was one of the “Rosie riveters” that we still see on those posters. That was a big deal then, during WWII, and now look at the opportunities my daughter will have to be a CEO, President or entrepreneur.

I believe the two biggest drivers of change, are movements and policy. As we are in an election year, in case you haven’t noticed–there is the opportunity to drive and highlight policies that are important to all of us–even if we have to use our “woman card” to bring attention to them.

I spent a lot of time this year at South by Southwest hosting at the #DellLounge, and was happy to see that this year women were a major force at the conference. More females gave keynote speeches, spoke on panels and attended the festival than in years past, according to USA Today.

Topics during South by Southwest included how to get children interested in STEM, create more inclusive workforces and fund women entrepreneurs so that they can scale their businesses. With 72,000 people in attendance, including many influencers (like President Obama), South by Southwest was the perfect place to drive movements and policy.

I had the pleasure of talking about Women, Policy and Entrepreneurship with Representatives Suzan DelBene and Susan Brooks, along with Ann Mei Chang, head of USAID’s Global Development Lab, and Dell’s chief marketing officer, Karen Quintos. Here are five key takeaways that I believe we can all get behind:

1.It’s been said that girls and boys show equal interest in STEM subjects until middle school, at which point girls’ interest begins to fade. We need to keep girls interested in STEM and show them that the field isn’t purely theoretical, perhaps through more career development days. People from companies such as Google and Microsoft should explain what a career is like in the field–this worked well at schools in Rep. DelBene’s district, and I think we can create programs across the country where people in the industry are interacting with and mentoring bright children.

2.We have a female funding problem–women start businesses twice as fast as men but often aren’t able to scale because of a lack of access to capital. Less than 5% of venture-backed companies were founded by women. Part of the issue is there are few women who are VC partners, and that needs to change, because often what women entrepreneurs need are strong mentors and advocates. At the end of the day, supporting women-led businesses makes good economic sense; female-led companies perform three times better than the S&P 500, according to a study by Quantopian.

3.Research shows that when companies are inclusive, it’s good for problem-solving and ideation. Not to mention that it positively impacts the bottom line. Every company says they’re focused on hiring a more diverse workforce, but the numbers don’t add up. There need to be more real policies that enforce more diverse hiring practices. At SXSW, I heard that the University of Texas implemented a new rule: For every senior position, there must be a female or minority background candidate in the pipeline. At other companies, managers’ stock options are tied to diversity goals.

4.Let’s not forget the challenges women around the world face in starting and sustaining a business. According to Chang, in many countries, women can’t own land, which is required for loans. For the women starting businesses, it’s typically not in tech or other high-paying industries, which hurts their ability to scale. In the developing world, USAID has been educating women on digital micro work instead of handcraft skills, which has enabled them to grow. And there are some great examples of networking groups for women in tech, like the Kenyan chapter of Women in Tech Africa. We need to be thinking about how to grow these opportunities for women outside of the U.S. as well.

5.Now that it’s election season, there’s a real opportunity to address this topic. What will our next president do to elevate women in tech? Organizing gatherings and meetups with the tech community would give entrepreneurs a platform to air their policy concerns. Providing tax incentives to venture capital firms that fund women and minority-led businesses would definitely help, as would ensuring that public-private partnerships include more people with diverse backgrounds. For children, the next president should emphasize the importance of STEM in education and create initiatives that support it, such as Girls Who Code. These are just a few ideas of many that should be raised to our candidates, who have the potential to improve our tech community.