What CIOs Need to Know About 5G

What CIOs Need to Know About 5G

After about a decade of planning and development, the first 5G networks are finally coming on line. The promise is big: high wireless bandwidth, high availability, and nonexistent latency. With such a foundational change in network infrastructure, 5G can’t help but change the wireless strategy of CIOs and network architects.

Now that 5G is real, what do CIOs need to know to stay on top of it? Is it too early—or too late—to plan?

For all the hype, 5G is barely out of the pilot stage, with fewer than a dozen U.S. cities running commercially. In June 2019, 15 carriers in nine countries are live with 5G service. That will ramp up rapidly, though. Wireless carriers have ambitious rollouts planned: According to industry trade group 5G Americas, 62 5G networks will be live somewhere in the world by the end of the year.

The most important thing today, experts seem to agree, is to stay current with your reading about both cellular and enterprise wireless technology. Both local- and wide-area networking are in for a lot of changes in the next few years, in hard-to-predict ways.

But the experts also agree that 5G will give CIOs much more freedom in the way they deploy both communications infrastructure and computing infrastructure.

There are three primary promises of 5G networks:

Those features are enough to make any network architect drool. The tricky thing is that such capabilities appear in different pieces of spectrum, and not all carriers own the same spectrum in all markets. Verizon is emphasizing high speeds; T-Mobile plans a mix of lower speeds but greater availability; AT&T plans gigabit speeds in cities and lower-spectrum services in suburbs and rural areas; and Sprint (which has a pending merger with T-Mobile currently up for regulatory review) claims spectrum in all three bands.

Making all this even more of a soup is the realities of physics. The millimeter wave spectrum that yields superfast speeds doesn’t travel very far; apparently, connectivity is measured in “dozens of feet” in commercial deployments. Millimeter waves have difficulty penetrating walls, which means that network engineers will need many, many antennas. Longer wavelengths will do better with coverage but at the cost of speed. It’s not as sexy, but the ability to handle lots of devices may be more important to CIOs than is rocket-sled speed.

“5G may sound simple, as its primary focus is on meeting the growing demand of consumers for low latency and very-high-bandwidth product features and service experiences,” says Joe Tuan, a mobile app developer in Irvine, California. “But the truth is, carriers would need to add substantial amounts of wireless channels, use wave technology to allow signal to travel to shorter distances, and increase the coverage map by installing small cell sites. More than the speed, CIOs should look at 5G as the technology that will allow networks to handle hundreds of millions of devices all at the same time.”

But those uncertainties don’t mean you should put 5G on the back burner of IT projects.

“There will be several iterations of the 5G standards. Some of this stuff will roll out over time,” says Jeff Edlund, CTO of Hewlett Packard Enterprise’s communications and media solutions business. “It’ll be awhile before there is saturation and availability everywhere of 5G public networks.”

But that doesn’t mean you should ignore the issue. “Now is the best time for CIOs to conduct an audit of their network infrastructures and plan a systematic upgrade or replacement of hardware or software to make way for 5G,” says Tuan, “since the cost of adapting this technology will be substantial as well.”

But for all of that, users are taking a wait-and-see attitude. “For me, it’s about use case,” says Jonathan Feldman, CIO of the city of Asheville, North Carolina. “It’s always about use case. What are we going to do with it? Who cares? Why bother? I can tell you that in many use cases, we yawn about 5G because range matters more” than speed in most applications.

Feldman talks about managing his city’s water system. The amount of data he needs to carry isn’t immense, but the reservoirs are far enough away to make building a 5G network expensive. For now, 4G LTE speeds are good enough, and its range beats 5G’s.

But just because no one has made the case for 5G yet doesn’t mean someone won’t. “At some level, you’ve got to build a 5G network, so I anticipate there will be use cases because we humans are endlessly inventive,” Feldman says. “But do I see them? My crystal ball is as good as yours. I don’t see a lot of excitement at the departmental level.”

CIOs planning for 5G should also be thinking about the impact of Wi-Fi 6 (perhaps better known as 802.11ax). Wi-Fi 6 will be faster than the current generation of 802.11ac devices and, generally speaking, remain faster than 5G networks. But 5G and Wi-Fi 6 work together in some interesting ways—among them, the ability for traffic to be handed off between a Wi-Fi network and a 5G network. That means a communications session that starts on a wireless carrier’s 5G network could be handed off seamlessly to a Wi-Fi 6 network and vice versa. 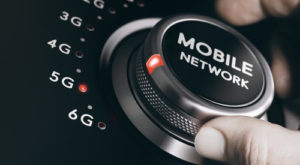 “There’s a level of granularity, control, and management of resources available to a Wi-Fi 6 network that was not previously available,” says Stuart Strickland, a distinguished technologist at HPE who works with standards organizations on the coordination of Wi-Fi and 5G. Strickland notes that Wi-Fi and cellular standards have been emerging and coordinating for several years. “Many of the advances of one have been copied and pasted into the other, so, for example, cellular can now operate in unlicensed spectrum,” and Wi-Fi 6 has adopted more efficient modulation schemes and deterministic scheduling, previously unique to cellular networks. “You can have many, many more clients on Wi-Fi 6 networks than you had before, which, in turn, opens up all sorts of IoT applications and improves voice calling as well.”

Moreover, if there’s such a close interaction of 5G and Wi-Fi 6 and the speeds become roughly comparable, CIOs will have the option of (and the complex problem of) deciding which network to rely on where.

5G and the edge

The full promise of 5G should make CIOs think about their network topologies, because high bandwidth and high availability will affect issues such as where on a network to place storage and processing power.

“There will be opportunities for them to develop coordinated networks across multiple radio technologies that could get quite complicated,” Strickland says. “But I think the most straightforward problem that we’ll be trying to solve is probably one that CIOs are familiar with: mobility between really wonderful oases of high-density Wi-Fi local coverage and really great mobility of a surrounding network. Visibility between 5G networks and Wi-Fi 6 networks is going to get a lot better, and there will be some skills specific to managing that visibility that they will want to acquire.”

Strickland emphasizes, though, that corporate CIOs will not need to know how to run a core phone network. A lot of the integration will likely become the purview of network equipment vendors or third-party service providers.

Network engineers may also need to wrap their heads around the concept that 5G will let wireless carriers become much more agile about providing network services. “Agile phone company” has been an oxymoron for well over a century, but those days may be numbered. Edlund suggests that 5G will let telcos roll out new services and applications in a matter of weeks rather than on a more accustomed 18-month cycle.

“It’s too easy to think of 5G as just a new network,” Edlund says. “It’s going to touch every facet of the way that we work and we live. Previously, with 4G, we’ve been connecting everybody; now with 5G, we connect everybody and everything. Enterprises need to think about their compute strategy, their storage strategy, and their network strategy. Because, naturally by its deployment, 5G flattens out the way a network is delivered, and it pushes compute and storage as far as you can out to the edges of the network. Enterprises should be considering this in their future strategies.”